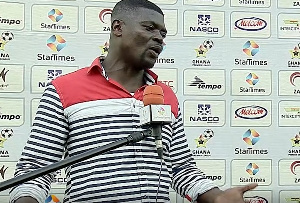 In the matchday 32 games, the Phobians, who have been poor in the ongoing campaign were hosted by the ‘Insha Allah’ boys in Kumasi.

However, Richard Akrofi scored in the 92nd minute as King Faisal picked up all three points to boost their chance of playing in the Premier League next season.

After the game, Boadu was left weeping as he suspected his players of playing a fixed game.

According to Kumasi-based journalist, Michael Akomeah, the former Medeama SC boss wept after the game and even threatened to quit his job as the head coach of the side.

“Coach Samuel Boadu crying at Baba Yara Sport’s Stadium… because he thinks his players played a fixed game… he wants to even quit the job…Wow,” Akomeah tweeted after the game on Sunday.

Match-fixing in the topflight football has become a major canker. Ashgold and Inter Allies have been demoted to Division Two after playing a fixed game during their 2020/21 Ghana Premier League at the Obuasi Len Clay Stadium.