Home / ENTERTAINMENT / SCREENSHOT+VIDEO: Samini and Stonebwoy ‘destroy’ each other on Twitter again

SCREENSHOT+VIDEO: Samini and Stonebwoy ‘destroy’ each other on Twitter again

It appears that the intense rivalry between Stonebwoy and Samini continues as these two have once again had a go at each other in what appears to be a new ‘beef’ on social media.

The two artistes on Monday, March 15, 2021, engaged in a heated banter over Stonebwoy’s congratulatory comments to Nigerian artistes, Burna Boy and Wizkid, for their Grammy award wins.

In what was meant to be a congratulatory message to these artistes, Stonebwoy asked Ghanaians to applaud their counterparts instead of acting bitter towards their win.

He said for once Ghanaians should learn to congratulate Nigerians for consistently projecting Africa globally in terms of entertainment.

“With All Due Respect Let All other African Nations Give It Up For Nigeria. For their Constant efforts in holding the Mantle for Africa when it comes to entertainment On the Global Scene. Congrats for holding it down at the Grammys. As for Ghana, smh I’ll be back,” pissed Stonebwoy wrote on Twitter.

But obviously irritated about Stonebwoy’s comments, Samini in a sharp rebuttal said:

“Ghana will be ok if we begin to keep it Hundred points symbol with each other as artists my gee.it starts from being honest and calling a spade a spade. Do you think they disrespect Idibia like you disrespect Samini?? #yearoftruth. Before you give extra fake fans to Nigeria #checkyourself faker,”

Stonebwoy in response asked Samini to utter such words to him physically instead of acting cowardly on Twitter.

He has for that matter declined to engage in any form of social media beef with the artiste henceforth.

“No disrespect, you just finished a Twitter beef with Shatta is it my turn now?? We know each other personally I cannot do this with you on social media,” he wrote.

“Smh Stonebwoy lol. You know you can’t throw dust in anyone eyes my son. You know exactly where I’m coming from. Don’t trash GH in congratulating Nigeria because they don’t disrespect their legends like you do period. A word to the wise. After calling me a sellout on a public stage during your mismatch clash? Who sold out who? We come from #grade1 … you got nerves to be tweeting at me. ShattaWale is a mate you are a son … get the difference. You disappointed me, son.”

Read their tweets below: 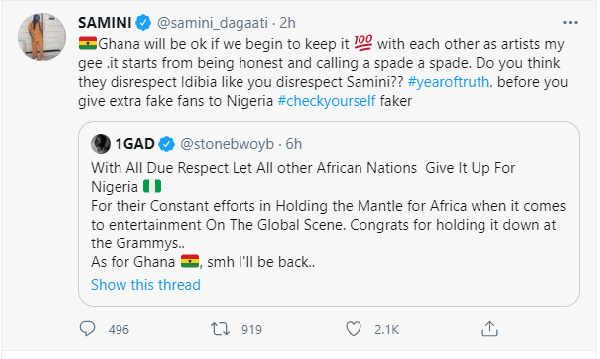 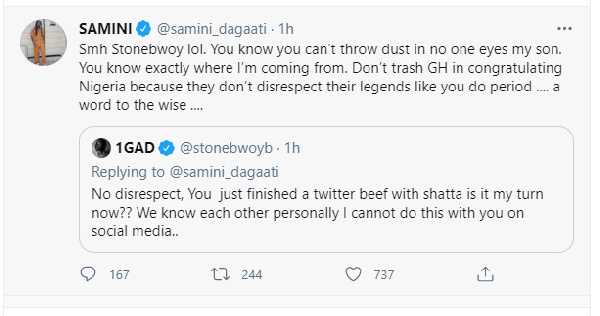 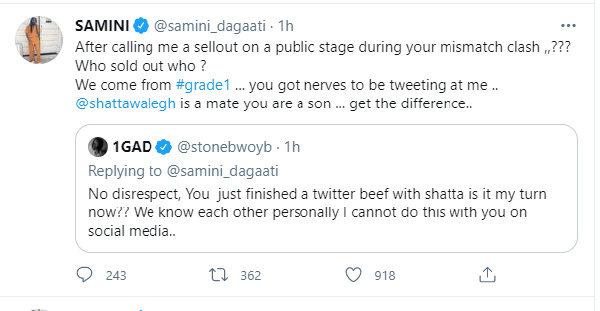 Previous [PHOTOS]: Cement truck runs over 19-year-old motor bike rider
Next He asked me to sign terms and conditions right after our honeymoon