Home / ENTERTAINMENT / Serwaa Amihere, other four Ghanaian female celebrities who have been ‘single-shamed’ 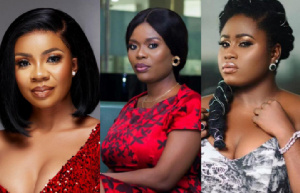 Serwaa Amihere, other four Ghanaian female celebrities who have been ‘single-shamed’

In Ghana, discrimination against women who are ripe for marriage but are still single ‘rears its head’ in every aspect of life.

Although tying the knot isn’t the only fulfilment in life for some women, especially celebrities, they are often looked down upon and asked questions mostly regarded as rude and intrusive such as:

“When do you intend to get married, you are getting old”?

In the Ghanaian setting, there is the popular perception that if women fail to get married “on time”, they may find themselves unattractive to men when they grow older.

Whereas for these female celebrities particularly, being single is a choice.

Let’s take a look at some Ghanaian female celebrities who have been trolled for being single:

Nana Aba Anamoah is one of the female celebrities who is perhaps sick and tired of answering questions relating to marriage.

It can be recalled that the mother of one has on several platforms expressed her displeasure about how she has been attacked for being single.

“I will marry when I am ready…I don’t think it’s right for people to disturb anybody with marriage. No one can be forced to get married; I don’t think there is anybody in this world who said that I hate marriage and nobody can also say that everything will be fine when they get married,” she once told Accra FM’s Nana Romeo in an interview.

Although she has plans to settle down someday, the popular newscaster has severally disclosed that she will do that at the opportune time.

The Ghanaian actress and single mother has on countless occasions stated that marriage is not the prime achievement in life.

This has been her response to people who often bug her with marriage.
It can be recalled that the actress sometime in 2020 responded to the question “when are you getting married?” with “is that an achievement? It’s not a degree.”

Delay has suffered a lot in terms of marital pressures from society.
The 38-year-old popular broadcaster is mostly trolled and shamed on social media for her single status.
But she has stated on several occasions that she is willing to settle down when she finds her choice of man.

The popular Ghanaian actress Lydia Forson has in several instances been captured throwing shots at critics who often ask when she will get married.

Lydia is among the many female celebrities whose single status have been condemned in recent times.

The popular GHOne TV’s presenter has recently joined the list of female celebrities receiving trolls on social media for being single.

It can be recalled that on Serwaa Amihere’s birthday, March 8, 2021, a social media user drew the public’s attention to the fact that she is fast approaching old age and as such needs to settle down.

Obviously irritated by such comments Serwaa was captured to have said:

“Everyday go and marry! As though it’s the most important thing in life. You’ll be pushing women to end up in unhappy and abusive marriages. Smh.”

Tags ARE Celebraties SINGLES WHO

Previous VIDEO: 14-year-old boy who slept in Trotro for months starts school
Next AstraZeneca vaccine is safe; no side effects recorded yet – FDA