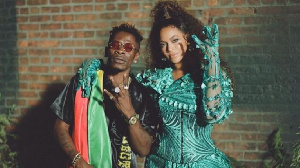 Shatta Wale along with Beyoncé and Major Lazer have been congratulated for winning ‘Best Collaboration’ at the 18th Annual Urban Music Awards 2022.

The news came as a surprise to many in 2019 when the Shatta Movement boss got featured on a song with Beyoncé.

He received congratulatory messages from his fans and some colleagues in the music industry over the song with Queen B.

Beyoncé earlier described her album as a message to Africa and named what influenced her decision to feature some of the big names in African music.

“I wanted it to be authentic and beautiful as the music is in Africa. The drums, chants, all of these incredible new sounds mixed with some of the producers to create our unique genre,” Beyoncé said.