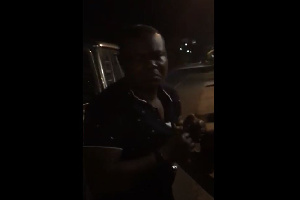 The Central Regional Police Command has arrested a 42-year-old driver who was captured in a viral video assaulting an alleged female sex worker.

GhanaWeb on Saturday, March 12, 2022, reported on the said viral video in which the driver now identified as Godwin Bayor alias Yaw, was captured by an eyewitness abusing the woman believed to be a commercial sex worker.

The eyewitness is heard on multiple occasions confronting the said driver as he further assaulted his victim who is also seen bleeding profusely and spotting a battered face.

An update issued on the Facebook page of the Ghana Police Service said the driver was arrested after the victim lodged a complaint with the Cape Coast Domestic Violence and Victim Support Unit (DOVVSU).

“His arrest follows a Police investigation into a viral audio-visual tape intercepted in which a man was captured assaulting a lady in the night. The victim subsequently lodged a complaint of assault at the Domestic Violence and Victim Support Unit (DOVVSU), Cape Coast, today Sunday, March 13, 2022,” the police statement said.

According to the police, the suspect has been held in custody while an investigation into the matter is being pursued.

Ghanaian female journalist, Bridget Otoo, who had earlier led a social media campaign for the arrest of the suspect, had indicated that Yaw Bayor is the driver of the headmaster of Aggrey Memorial Institute in Cape Coast.

UPDATE: The man in the video is called Yaw, a driver to the headmaster of Aggrey Memorial school in cape coast @GhPoliceService
I have done the work for you, please arrest him. https://t.co/zpq9hwOdGp

As seen in the viral video, the victim who held the shirt of the suspected government worker, who drove the vehicle with government registration number “GV-127-16,” narrated to the eyewitness what ensued between herself and her ‘client’.

According to her, the alleged driver of the Senior High School headmaster engaged her service with the agreement to pay a certain amount but the man, after the encounter declined to pay as agreed.

She insisted in the Fante language that the man fulfil his side of the agreement else she will not let him go.

The suspected government worker got furious and in a bid to ‘run away’ hit her with an object that got her face bleeding.

This bit of her narration was corroborated by the eyewitness, who recorded the video, and promised to report the case to the police and have the man arrested.

The video led to a social media campaign that saw several calls across various platforms for the arrest of the suspect.

Bridget Otoo in a subsequent update on her Twitter page indicated that she has been able t reach out to the victim of the assault.

“Hello everyone, I have spoken to the woman (name withheld) in the viral video who had been beaten by the man with the government vehicle. She was overwhelmed by all that is going on and obviously hasn’t experienced anything like it.

“She’s traumatized and has one request; for the video to be deleted on all platforms. I have deleted the video from all my social media platforms, I hope you do same too. That’s all I can share for now,” the journalist wrote.

Bridget Otoo who is seeking to establish the alleged sex worker shared a medium of contribution towards setting up a business for the victim.

“If anyone wants to support her financially to set her up, send momo to 0546940852 Name on Account is Bridget Otoo,” she added.

I have spoken to the woman (name withheld) in the viral video who had been beaten by the man with the government vehicle. She was overwhelmed by all that is going on and obviously hasn’t experienced anything like it.