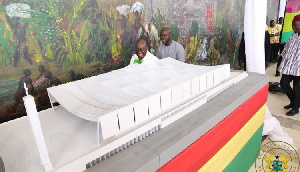 • Finance Minister Ken Ofori-Atta says the project will be commissioned on March 6, 2024

Social media reactions have trailed the appeal by government that Ghanaians contribute financially towards the building of a National Cathedral in the capital Accra.

Finance Minister, Ken Ofori-Atta, on Thursday (July 29, 2021) appealed to Ghanaians to help the government with fundraising eforts to help with the building of the proposed National Cathedral.

He told Parliament as part of his presentation of the mid-year budget review that government had acquired a short code to which citizens can donate GH¢100 each month towards the project.

The response on social media has been varied but largely critical of government and its plans.

There are those who choose to see the hilarious aspect of the move whiles for others, for as long as it was a voluntary endeavour, critics were making a fuss about nothing.

From celebreties, social commentators and ordinary Twitter users, government might as well use this fundraising method for other pressing interventions in the provision of social infrastructure and amenities.

Below are some of the reactions:

What Ofori-Atta said about the Cathedral in Parliament

Making the appeal during his Mid-Year Budget Review reading on July 29, 2021, Ofori-Atta said on the floor of Parliament that the objective of the fund-raiser is to get about a million Ghanaians contributing towards the construction.

The initiative, according to the Finance Minister has been dubbed “Ketoa Biaa Nsua” which translates into “no amount is too small.”

“A special shortcode 979 has been developed for this purpose as we look forward to Mr speaker and all the members of this august house to join in the GH¢100/a month.”

Previous No susu for hospitals, killer roads but for Cathedral ‘they wanted’ – Lydia Forson jabs
Next How boy’s ‘Our Day’ list sparked excitement, donations on social media