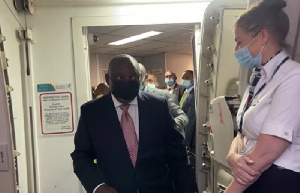 The presidency shared a video clip that showed Ramaphosa and his team walking down a long hallway at the airport to board the flight instead of the usual stairs and onto the presidential jet.

As he approaches the plane, he stops to elbow-shake all of the airport staff and exchange some light moments with them in the local language.

At the gate, airline officials pull out his passport and that of five other members of his delegation before ushering then on board.

It is understood that this is the president’s team alone given that an advanced party was in Brussels for preparatory meetings.

He has since arrived in Belgium to participate in the 6th AU-EU summit that starts February 17 and ends February 18. A number of African leaders are in attendance.

A similar incident happened last year with the Zambian president Hakainde Hichelima who boarded a commercial flight on his way to the United Nations General Assembly in New York.

Find the video shared by the presidency below:

Previous We will remodel tollbooths as police posts, emergency centres — Amoako-Atta
Next Ghanaian football stars who are police or army officers