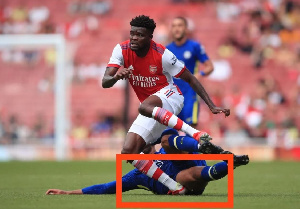 Arsenal midfield star Thomas Partey is facing about six weeks on the sidelines following the injury he suffered in their friendly against Chelsea on Sunday, a leading sports injury doctor has revealed.

The highly respected English sports injury doctor Dr. Rajpal Brar revealed that the injury suffered by the Ghana deputy captain ‘is typically indicative of a “high ankle sprain”’ which is known as syndesmotic tear.

The medic revealed that the Ghana playmaker’s injury is similar to the ankle setback Manchester United and England star Harry Maguire suffered recently.

He revealed that Partey could be out for nearly two months if scans reveal that it is a Grade 1 ankle injury.

The injury has sparked worries for Arsenal supporters and Ghana football fans with the start season looming and the experienced hand in sports injuries says Partey faces some time on the sidelines.

“Found the specific mechanism of injury for Partey (see picture above),” Dr Brar wrote on social media on Sunday night.

“This is typically indicative of a “high ankle sprain” also known as syndesmotic tear.

“These typically come with a 4-6 week return timeline if a grade 1 injury. A recent example is Harry Maguire.”

Partey will undergo scans today (Monday) to determine the severity of the injury he suffered while playing for Arsenal on Sunday.

The Arsenal playmaker suffered the injury on Sunday while playing in their friendly against city rivals Chelsea in a pre-season match with the new season looming.

The Ghana international was substituted in the first half of the match which has sparked concerns for fans of the London club.

Partey appeared to have damaged his ankle in the first-half challenge by Ruben Loftus-Cheek.

He received extensive treatment in the 34th minute, before trying to carry on.

But just six minutes later he was down again, and subsequently replaced by Granit Xhaka and Arsenal went on to lose the match 2-1 at the Emirates.

Partey battled injuries during his first season at the Emirates after making the switch from Atletico Madrid.

Arsenal will play their last friendly against north London rivals Tottenham on 8 August before the season starts.

The Gunners will get their Premier League campaign gets underway against newly-promoted Brentford.