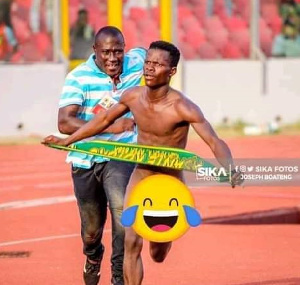 It was all joy for the Porcupine Warriors supporters after a 1-0 win over their sworn rivals in matchday 24 of the Ghana Premier League.

The Phobians lost by a goal to nil during the super clash courtesy Franck Mbella Etouga goal from the spot.

After the game, Kotoko fans cheered and chanted loudly but it was Martin Kyei who stood out among the jubilant fans.

He took his celebration a notch higher by jumping into the stadium while naked.

Reacting to his actions, Kyei said, “People may think I am mad, some may also think I won a bet but it’s all bound down to the love I have for Kotoko. No one knew how I felt when we defeated Hearts of Oak. I even wanted to bisect my stomach and put all the players in”

“During the days of Eric Bekoe, Soulama Abdoulaye and others, Hearts of Oak defeated us 2-0 and, on the day, I cried until I reach my destination. I do love Kotoko and because of the club, I lost my job. I’m a driver but I forfeited my job and went to the stadium to watch Kotoko’s match, which made my car owner furious. He took his car from me afterwards” he told Adom FM.

“I’m not married but even if I were to be married, I would have still gone naked because the only person I love in life more than Kotoko is my mother”

“I don’t regret doing that on the day but if anyone is disappointed by my actions, I apologize. Ghanaians and the entire world should forgive me. I just want management of the club to know I am a die-hard fan”

“It is not going to end here, anytime I go to the stadium I will let people feel my presence in a different way but I won’t go naked again”