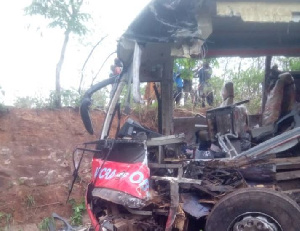 • Two people died on the spot

STC driver and his co-driver have died in a car accident at Akim Asafo in the Eastern region on Wednesday, June 16, 2021.

The deceased drivers have been identified at Victor Quest and Joshua Tay.

Their bodies have been deposited at the Suhum Government Hospital for preservation and autopsy.

Meanwhile, the passengers aboard the bus have been rushed to the Kibi Government Hospital for medical care.

According to the Eastern Regional Police Command, the STC bus was moving from Kumasi to Accra while the articulated truck was heading towards Kumasi but was abandoned on the road after it developed a mechanical fault.

The Deputy Public Relations Officer of the Eastern Regional Police Command, Sergeant Francis Gomado stated that it is about time there is a rapid response system to tow broken down vehicles from the road to prevent deaths on the highways.