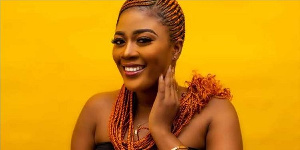 Amma Serwah, a popular Ghanaian actress and fashion designer, has advised men to stop expecting the private parts of their partners to smell like perfume.

She explained that sometimes, people say that when women get candidiasis, they cannot see it, but the men can see. However, she clarified that in reality, a woman knows when she has candidiasis because the smell of her vagina changes.

According to her, when a woman has Gonorrhea, it may be difficult to see from the start because it is more obvious in men.

On that note, she advised that there are a lot of factors that can cause a change in the smell of a woman’s vagina; however, “as a man, you shouldn’t expect the vagina to smell like perfume. Even a clean and healthy vagina does not smell like perfume”, she said.

Mentioning some of these factors that can cause vaginal odour, she listed birth control or long-term contraceptives, menopause, as well as certain foods that women eat or drink.

She also noted that some women, at some point during their menstrual cycle, have vaginal odours, and that is usually a normal occurrence; hence it does not mean she has an infection. This was during a discussion with Adwen the Love Doctor On eTV Ghana’s adult show ‘In Bed with Adwen’.

Amma continued that in some cases, a woman’s sexual partner may be responsible for the bad odour in her vagina.

“Sometimes, when a man’s sperms come into contact with a lady’s vaginal fluid, it could cause her vagina to smell, but that usually does not last long. It only stays for a few hours, and she will smell normal again”, she revealed.

Amma explained that just like it is in women, this could also be caused by some foods that the man eats.