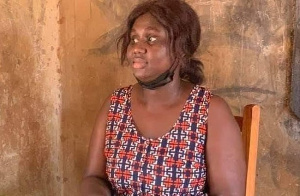 District Chief Executive (DCE) and the District Director of Education for Atwima Nwabiagya North in the Ashanti Region, have been accused of “harassing” the teacher who provides hot meals for school children.

Abena Serwaah Mankosa, a class 1 teacher at Aninkroma D/A Primary school made headlines in the country last week after it emerged that she provides the kids in her class with hot meals on daily basis.

The reports said, Abena has been funding the cooking from her own coffers and also gets support from friends on Facebook.

However, it appears authorities in the area are not happy with the teacher’s humanitarian assistance as she has allegedly been called for questioning.

According to NDC’s Yayra Koku, Abena Serwaah was on Friday invited by the Education Director, and “queried her for soliciting support on social media”.

Yayra also alleged that DCE for the area, Ms. Rebecca Yeboah, also found the teacher guilty of a “well-orchestrated attempt to dent the image of the Akufo-Addo government”.

He further claimed the DCE has since directed that Abena Serwaa Mankosa be transferred from the District.

Yayra Koku who sees nothing offensive with the teacher’s conduct says the authorities should “stop harassing the innocent lady” since God has given them brains to think.

I find the story of this young lady rather absurd, and I think the voices of reason in this country must come to her rescue.

Information garnered from trusted source details she was invited by the District Director of Education for Atwima Nwabiagya North on Friday to answer queries on her said misconduct, i.e. (adding protein supplements to government’s school feeding meals & providing snacks for her pupils’)

The District Director also queried her for soliciting support on social media to help buy school uniforms for the kids.

According to the Director, Abena’s act constitutes gross misconduct against the GES code hence refereed her to the disciplinary committee for further action.

Ms Rebecca Yeboah, the DCE for the District, also asserted Abena’s conduct as a well-orchestrated attempt to dent the image of the Akufo-Addo government because she’s NDC and has John Mahama’s picture on her Facebook cover page. The DCE has issued a directive to the District Director for the immediate transfer of Abena from the District.

Is this how low our politics has sunk after 64 solid years of nation-building? Why are some elements in the government trying to frustrate a teacher who’s only crime is making life comfortable for her underprivileged pupils?

If I should write more, I’m sure Facebook will block me, so please, the District Director of Education and the DCE for Atwima Nwabiagya North, stop harassing the innocent lady. God gave you brains to think not to do “nkwasiasem”.

Previous [VIDEO]: Meet the man who has been selling ice cream since 1983 in Tema
Next Supreme Court Orders EC Boss Jane Ansah to step aside after election ruling