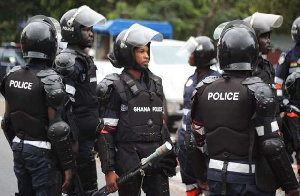 Director of the Cybercrime Unit of the Criminal Investigation Department, Ghana Police Service ACP Dr. Gustav Yankson, has cautioned television channels promoting swindlers to stop or be dealt with.

The Inspector-General of Police (IGP) James Oppong-Boanuh he disclosed has ragged a war against such activities hence the CID Unit will not relent in their efforts in ensuring that such persons are dealt with.

”The IGP and the Director General of CID have both expressed worry over the activities of swindlers on TV. So we directed our cyber unit to take action. We arrested two manager of two different stations. We are using the two to serve caution to other stations to desist from the activities. From today, we will come after the other TV stations. After the TV stations, we will go after those swindlers involved then the victims will also follow,” he said.

The Cyber Crime Unit of the Ghana Police Service last week arrested the general managers of Accra-based free-to-air (FTA) television stations, AB TV and Amen TV, for promoting the activities of swindlers on their channels.

They were arrested in a special operation aimed at clamping down on persons behind advertisements on television stations who claim they have the ability to double money for their clients.

Dr Gustav Yankson, reacting on the arrest revealed the two managers would be sent to court and prosecuted.

He said the police is aware of all television channels engaging in such activities and has asked them to use the arrest of the two managers of the two stations as a lesson and desist from promoting swindlers.

He added thee Cyber Unit is on a mission to stop these charlatanic advertisements.

Dr Yankson said the issue of people claiming to double money to make people rich overnight on television has reached an alarming rate and the only solution is to deal with the stations promoting such activities.

Previous We’ll vote for you to pay us – Menzgold customers to Mahama
Next Afia Schwarzenegger finally reveals why she slept with a dog for $5,000 in Kumasi (Watch)