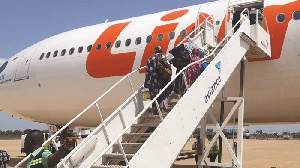 Some Muslim pilgrims have expressed disappointment towards the Hajj Board after they were abandoned at the Hajj village for hours.

According to them, they were expected to travel to Mecca but the board has intentionally removed their names to the final list of travellers while their passports are also being held by the Hajj Board.

Most of them, believed to be part of the 2019 batch who made payment before the ban of pilgrims, are demanding a refund from the board.

Last month, the Hajj boards had promised to prioritise the 2019 batch but they are yet to be airlifted, despite proof of their documentation.

“They said they cannot find my passport; I am broken, I don’t want to cry but it’s not easy. We were told those who paid in 2019 are going to be among the first passengers but that did not happen.

“The holiness of the whole issue, probably, the process is not as holy as the activity itself. Now, I am sitting here with no hope. This time, we are not going to leave the money with them,” myjoyonline.com quoted one of the pilgrims.

Chairman of the Hajj Board, Sheikh Ibrahim C. Quaye earlier said some pilgrims had paid monies to the board before the ban. Such people, he explained, were expected to make an additional payment of GH¢7000.00 to the previous amount of GH¢19, 500 they paid.

He also added that those who made payments before the ban will be considered first before other pilgrims.

“After the ban on Hajj was lifted this year, quotas of all participating countries have been drastically reduced. Ghana’s quota is 3,069 instead of the 2020 quota of 6,000 pilgrims, and so we will consider those who left their monies with us first before any other pilgrim,” he said

But that has not been the case as many who were part of the last batch have been left out after the ban was lifted for this year’s pilgrimage.