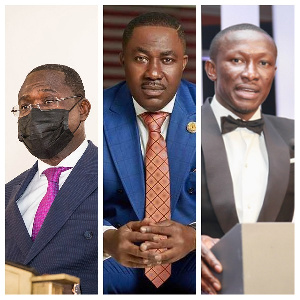 We all love the underdog story, don’t we? The rags to riches of that man who came from the village and set up the biggest business in Accra.

The story of that woman who started from zero and now leading the pack in her chosen area or the story of that business mogul who began in a kiosk and now boasts of some of the country’s biggest retail shops.

These stories abound and are inspirational, motivational and give the belief that with time and the right attitude, we can also reach there.

There however exist some rag to riches stories that raise eyebrows. Not that they did not happen but the way they are told, makes it hard to believe.

In Ghana, there exist an endless list of successful business persons who with nothing set themselves on a path to success and are now celebrated for their shrewdness.

There are stories of these magnates that some, if not most people, find hard to believe.

GhanaWeb brings you five of such stories.

I set up my company with GH₵3 – Jospong

In the waste management industry and allied areas, the Jospong Group reigns supreme. Lately, they have made a foray into the media space with the acquisition of Metro TV and the establishment of Original TV and Radio.

The success of Jospong would not have been possible but for a GH₵3 initial investment by the owner, Joseph Siaw Agyepong.

Nana Kwame Bediako, Cheddar and Freedom Jacob Caesar. Don’t be confused, they are all names of one person who is represented in the media as a real estate mogul.

Media reports indicate Cheddar or whichever of the three names you opt for owns some of the most patronized and luxurious buildings in the country.

From the Number1 Oxford Street to the Kwarleyz estates, Cheddar has built a niche as a real estate magnate in the country.

But his story started with dismantling his car and selling it as scraps to dealers in the United Kingdom.

“By age 21, he had made a million pounds for himself, selling scrap, steel, and telecommunications material while in school at Waltham Forest College,” Joy FM’s Twitter quoted him.

Osei Kwame Despite is hailed and celebrated as an entrepreneur and job creator who has given job opportunities to thousands of people.

From media to financial to the beverage industry, he has an interest in key sectors of the Ghanaian economy.

It is an unhidden secret, however, that Despite’s wealth began with the selling of records at Kantamanto.

From there, he built a music distribution empire that catapulted him into what is known now.

In the phone and accessories business, St Philips enterprise is high on the list of most popular companies.

With constant media advertisement, St Philips has positioned itself as a destination for phones and accessories.

According to the CEO, Philip Danquah, the entire St Philip enterprise was made possible by a GH₵2.50ps investment.

“I sold my coal pot for GH₵3 and came to Accra. The whole St Philip Enterprise started with GH₵2:50pesewas”, he told Adom FM.