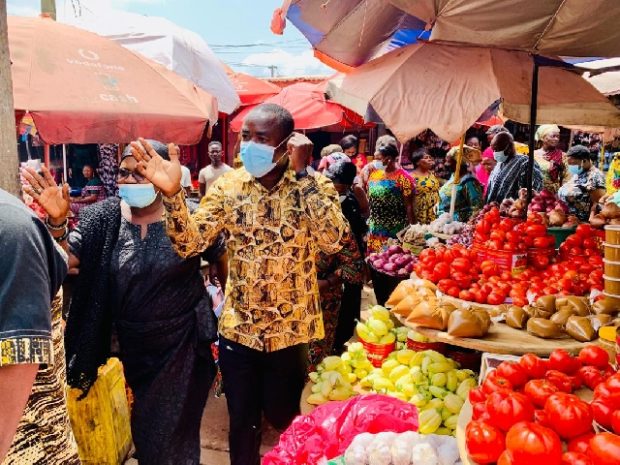 The Municipal Chief Executive (MCE) of the Sunyani Municipality in the Bono Region, Ansu Kumi, today, Friday, 5 November 2021, led the Assembly, including the Coordinating Directors, in discussions with the leadership and traders of the Sunyani Everyday market about solving their challenges.

The move forms part of plans by the MCE to device adequate measures together with the market folk to ensure the development of the market for mutual benefits for all stakeholders.

The Sunyani Everyday Market is bedevilled with a litany of problems, according to its president who is also the Dwantoa Hemaa of the Sunyani Traditional Area, Nana Abowaa Boahemaa.

She said poor road infrastructure, inadequate spaces to let out to traders for business, poor sanitation and a lack of toilet facilities among others are of major concern.

Responding to the concerns, the MCE called on the entire market to help him solve the problems.

He maintained: “We will deal with these problems consultatively so that we do not leave anyone behind.”

He noted: “All of us know the problems now and, so, we have to be willing to make sacrifices to see to the solving of these problems. A policy framework toward resolving these problems is being developed by the departments as I speak and when it gets to its implementation, I pray you give us the maximum support toward realising it”.

He continued: “We are here today to listen to you so that we can factor your contributions into the plans we are making.”

The MCE was led through the various segments of the market including the spots for yam, tomatoes, dried fish, onion, beef, cassava, shrimps, dawadawa and ceramics sellers.

In the company of the MCE and his workers were the constituency executives of the NPP including the Second Vice Chairman, Mr Ebenezer Opoku; the Organiser, Mr Bartholomew Incoom Nathaniel; Evelyn Amoah Botwe, Women Organiser; her deputy Salamatu Abdulai; Salia Moro, Nasara Coordinator; Ibn Ahmed (Youth Organiser) and some polling station executives and their electoral area coordinators.

Clement Apaak files motion for WASSCE leakages to be investigated