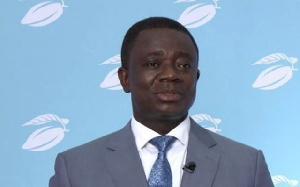 •Mr Stephen Opuni is the former CEO of COCOBOD

• He is standing trial for causing financial loss to the state

Today, Wednesday, July 28, the Supreme Court will rule on an application by former COCOBOD CEO, Dr Stephen Opuni, seeking the removal of Justice Clemence Jackson Honyenuga from his trial.

Dr Opuni, the former CEO of COCOBOD who is standing trial with two others for allegedly causing financial loss to the state, has pleaded not guilty.

He has also accused the presiding judge of his trial of making unjust comments even before his defence is opened. Consequently, Dr Opuni wants the judge removed and the case assigned to a different judge per the application at the apex court.

The trial of the former COCOBOD boss was put on hold as a result of the petition sent to the Chief Justice seeking his intervention.

Dr. Opuni, on two occasions, pushed for the judge hearing the case, Clemence Jackson Honyenuga, to recuse himself. However, both attempts failed as Dr. Opuni was ordered to open his defence.

On Friday, June 18, Justice Honyenuga said he had received a copy of the petition sent to the Chief Justice but did not disclose the contents of the petition.

He also said Dr. Opuni had filed another application at the Supreme Court seeking its intervention.

Justice Honyenuga adjourned the hearing to June 29, to await the Chief Justice’s decision on the petition.

Dr Opuni, who is standing trial for allegedly causing a financial loss of ¢271.3 million, went to the Chief Justice, after the presiding judge, Justice Clemence Jackson Honyenuga, dismissed his application of asking him to recuse himself.

Previous Obinim is back on Twitter trends; here’s why
Next Some women campaigning to be allowed more than one husband – Krachi West MP