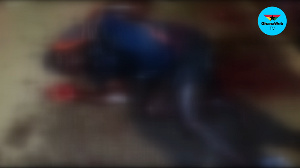 A suspected thief who allegedly attempted breaking into a phone shop at Ogome, a suburb of Somanya in the Eastern Region Tuesday dawn was nearly lynched by an angry mob.

The timely intervention of the police saved his life.

Information gathered by GhanaWeb suggests that the suspect who claimed to be a native of Kumasi-Abuakwa but resides at Mataheko, a suburb of Afienya in the Greater Accra Region together with two accomplices who managed to escape from the mob, attempted breaking into the container which was stocked with mobile phones and accessories.

The culprits had allegedly already cut one of the padlocks used to lock the shop before being apprehended.

Narrating the incident to GhanaWeb, a resident of the area said his attention was drawn to the scene around 2 am when he together with an uncle were on their way to the roadside at that time of the morning.

“I was home when I decided to come to the roadside and I saw two people standing by the container and cutting it. So I called my brother and told him what was going on and they came. The two cutting the container managed to escape but we caught the driver,” he narrated.

The suspect upon seeing the approaching residents attempted to escape by speeding off in a KIA truck with registration number AS 1040-12 which they had parked in front of the shop but he was accosted by the residents.

The confrontation attracted others to the scene who, not convinced by his answers to their interrogations, assaulted him severely with all manner of implements to the point of death.

He sustained deep cuts on his head and severe injuries on other parts of his body before personnel from the Somanya District Police Command intervened and sent him to the hospital.

The KIA truck was set ablaze by the angry mob before personnel from the Somanya Ghana National Fire Service were called to put out the fire.

Upon interrogation, Kojo told the police that he had gone to offload some bags of maize at Asutuare in the Greater Accra Region and was on his way back when the two asked him to convey them to Ashaiman.

Assemblyman for Ogome Electoral Area, Hon Richard Kumah in an interview explained that he was called around 2:30 am to the scene and immediately proceeded to the Somanya Police Station to report the incident.

He referred to a similar instance in the area a few months ago where a phone shop was cut open and the items were stolen.

He however called on residents not to mete out instant justice to thieves and other criminals but draw the attention of the police to the scene for prompt action.

Efforts to get a response from the Somanya District Police Commander, Superintendent Andrews Anyani proved futile as he didn’t pick up his calls.