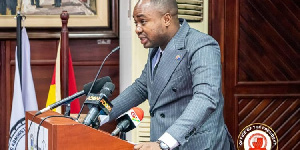 Wisdom Victor Kutor has been removed ad the president of the Student Representative Council, SRC, of the Ghana School of Law after he was impeached.

The embattled student leader removed after he was found guilty of financial impropriety by the SRC’s Supreme Court.

Citi News reports that the apex court is yet to provide its full judgement in the matter.

This is the latest leg of a running saga that dates months back. In April 2022, Kutor, denied all claims of wrongdoing levelled against him by some other executives of the student’s body regarding the purchase of a Toyota Corolla vehicle for the school.

Other allegations also include his unilateral operation of the MobileMoney account of the organization.

Speaking for the first time with GhanaWeb back in April, he said that throughout his life in public service, he has held his integrity intact and stayed away from anything which will dent his image and that of his family.

“I have seen leaders across the world suffer these hate attacks when you seem to be doing the right thing in the interest of your people but it is well,” he explained.

He told GhanaWeb that the matter was in court and so he wonders why there would be a rush for him to appear before an independent investigative committee which, for him, does not have such powers under the SRC constitution.

“As law students, we need to uphold the fundamentals of the laws and to a very large extent, the constitution. We cannot be seen to be engaging in activities which are contrary to established rule of law,” he said.