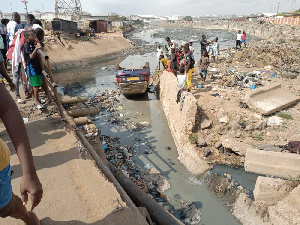 Three persons including a driver of a taxi cab, are in a critical condition after the taxi in which they were travelling in, somersaulted and fell into the Chemu lagoon in Tema Newtown.

The driver of the taxi cab with registration number GS-2986-13, who has since been identified as Ekow Essumang, is reported to have lost control while travelling on the Newtown community one road at around 5 a.m. Friday dawn, after a truck pusher had accidentally crossed his path.

According to some eyewitness accounts, the driver who was travelling on a top speed, lost control of the wheel, falling into the lagoon after breaking the metal barricade used in fencing the bridge which sits on the lagoon.

It took the help of some residents and a police officer, to pull out the driver and his two passengers who had sustained life-threatening injuries.

The situation has since created some vehicular traffic on the Newtown community one stretch.

Meanwhile, the victims of this morning’s accident are currently receiving treatment at the Tema General hospital