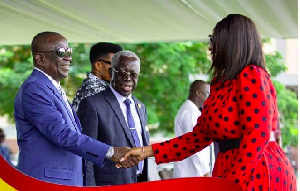 Executive Director of the African Center for Security and Counter-Terrorism, Emmanuel Kutin, has expressed worry and described the appointment of Ambassadors for the “See Something Say Something” terrorism awareness campaign as needless and dangerous.

The National Security Ministry launched a citizen awareness campaign dubbed the ‘See Something, Say Something’ campaign to encourage people to report suspicious acts of terrorism.

But speaking on the Class Morning Show on Class91.3FM on Monday, 6 June 2022, Mr. Kutin told show host Kofi Oppong Asamoah that the government must cancel the ambassadorial role to protect the gospel musician from being a target.

He said “The campaign is a good one, what I’m not comfortable with the campaign is the ambassadorial role, I’ve not seen anywhere in the world where a country as a strategy of confronting terrorism put people as ambassadors for such a campaign. Even those people themselves will become targets of these terrorists, their lives will be in danger so I don’t even understand why anybody who understands the psychology of terrorism will accept to be an ambassador for such an enterprise.”

He added that “Terrorism is not an issue we should toil with, it’s a serious business because we are talking about lives here, and everything should not be about politics.”

In his view, “the earlier the government rescinds its decision of ambassadorial role the better for the program, otherwise, the program is dead on arrival and I think It’s even in the interest of those ambassadors and their families to decline such roles otherwise they will needlessly be putting themselves and families at harm’s way.”