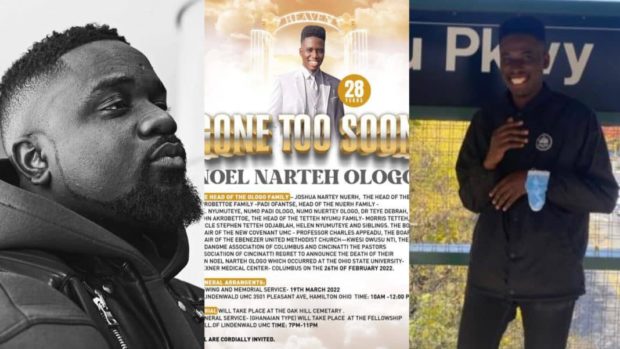 Rapper Sarkodie has mourned a young fan who passed away quite recently.

The Sarkcess CEO has acknowledged the immense support and love the deceased fan showed him when he was alive and the critical role he played in his (Sarkodie) success as a musician.

Sharing a tweet and eulogizing the fan, a sad Sarkodie intimated that Noel Narteh Ologo aka Sark Dey Spy’s support was extraordinary and second to none. He expressed severe commiserations and prayed for his gentle soul to be received.

“It’s been a while since I heard from this brother and i realized that cos he’s one of the few fans who stand out with their support ( very consistent ) Thanks for fueling my success journey. May God Keep your soul till we meet ?? RIP #DeySpy“

Per the Obituary poster, the young fan died at the Ohio State University Medical Centre on February 26t 2022 and will be buried on 19th February 2022 in the states.

However, fans have urged Sarkodie to go beyond the mere expression of grief. He has been encouraged to show support to the family both in cash and kind.

@KingShattaBa wrote: As he dey alive I’m not sure u meet him or recognize his hard work in ur career. But as he d!e u post am that good thou. Make we see top as we dey alive not when we’re no more. It goes to all the artist not u alone sark.

Sark Dey Spy was 28 and quite an influential fan. Check out one of his videos below:

Tags FOR fueling JOURNEY MY success THANKS