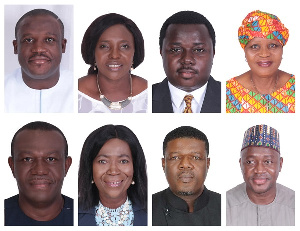 •Ghana’s Speaker of Parliament, Alban Bagbin has already made his stance clear on being anti-LGBTQ rights

While a section of Ghanaian liberals on social media are still debating over whether a bill proposal to criminalize LGBTQ acts is apt, a list of lawmakers pushing for the bill to be passed have emerged.

Though homosexual acts in Ghana are punishable by imprisonment and considered to be against the sociocultural and religious norms and teachings, the latest move would be one that will definitely not be welcomed by some liberals.

Leading the pack in terms of social media activism for the anti-LGBTQ bill is Ningo-Prapram MP, Samuel Nartey George who has not shied away from his stance to ensuring the bill is passed by Parliament.

Over the weekend, there was a banter of words between Sam George and others on social media platform Twitter. This culminated in his account being reported for inciting hate against LGBTQ advocacy groups after he received some backlash over some utterances he made.

The social media debacle also involved popular Ghanaian singer, Sister Derby trading shots with the lawmaker. The two seemingly could not get past their differences and this resulted in some harsh words and criticisms.

Already, portions of a leaked 36-page bill proposal have in the past few days made rounds on various social media platforms with varied sentiments expressed on the matter.

A section of liberal Ghanaians on the platforms believe the bill and its entirety when passed, violates some human rights as it infringes on people’s sexual preferences. Others, not so much, as they strongly believe LGBTQ acts are against the sociocultural and religious norms and teachings in Ghana.

Among some of the actions contained in “The Promotion of Proper Human Sexual Rights and Ghanaian Family Values, Bill 2021” the proposal will see culprits face a jail term of up to ten years depending on the crime if passed in its current state.

This means that any person who “holds out as a lesbian, a gay, a transgender, a transsexual, a queer, a pansexual, an ally, a non-binary or any other sexual or gender identity that is contrary to the binary categories of male and female.” commits an offence.