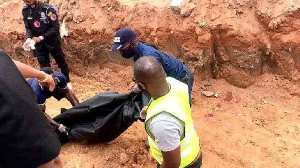 Environmental officials in the Kwahu West Municipality of the Eastern Region have exhumed the corpse of a woman they mistakenly buried during a mass burial exercise.

The body was mistakenly buried along with some other bodies at the Nkawkaw-Trafford cemetery in January, this year.

However, the family displeased by the action of the incident went to court to seek redress.

The Nkawkaw magistrate court ordered the exhumation of the corpse on request by the family.

The case at the court is yet to be done with.

The body of the late Afua Ataa was kept at the Nkawkaw Holy Family hospital after she was pronounced dead.

Efforts by the family to get a post-mortem on the body got dramatic after hospital officials could not find the body.

It emerged that her corpse was part of a burial mass that took place in January.