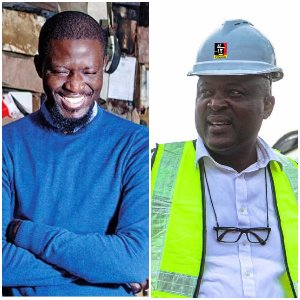 Names, they say, are powerful and can influence a person’s life in many ways; positively or negatively, and that might just be the spell with the combination of the names Ibrahim and Mahama.

And while it isn’t too uncommon to find people bearing the same names, what is rarer is to have two persons with the same name have similarities in terms of wealth acquisition and status.

Speaking with GhanaWeb TV’s People&Places recently, Ibrahim Mahama the artist described how beautiful an encounter it was for him when he met Ibrahim Mahama, brother of Former President, John Dramani Mahama.

“Interestingly enough, for the first time, we met and it was interesting. I think that he’s one of the most generous people I have ever met and we had such beautiful conversations. I think the problem is that because he’s known to be Ibrahim Mahama, the brother of John Mahama, and also for being rich, a lot of people don’t really take time to know him [the person he is] and so today when I met him, it wasn’t so long, but I got a glimpse of him in terms of his honesty,” Ibrahim Mahama the artist said whilst describing his friend – the other Ibrahim.