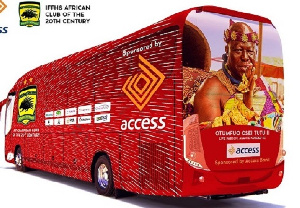 The club unveiled the bus which has been branded with the club’s colors and the image of the live patron of the club, Otumfuo Osei Tutu the II.

The bus also has a logo of Access bank posted on it after Kotoko struck a loan agreement with the financial institution to purchase the coach.

According to the Kessben FM, Asante Kotoko were loaned an amount to purchase the bus with the club agreeing to pay the debt with matchday gate proceeds.

Although the amount is unknown, Kotoko per the agreement will have to give access bank 60% of their net gate proceeds over a period of five years.

Kessben FM says the club management would want to settle the debt before the agreed 5 years. However, it depends on the club’s financial strength and stadium attendance.

Currently, fans of Asante Kotoko are not attending matches which poses threat to the club’s ability to raise the needed funds to pay the loan.

As a result, the supporter’s chairman, Christopher Domenya has said the National Circles Committee, which is in charge of the supporters, will launch a door-to-door campaign.

Speaking to Kessben FM, Domenya explained that the move is the only way to get the fans to attend the stadium despite the club leading the table.

“Door-to-door campaign means we are going to visit every depart that Kotoko supporters are then we will preach the goodies about the team to them. Some people don’t understand the news from afar so we want to get close to those people. We have to make them feel important and that the team needs them. Because the team is performing and they should be at the stadium. But there is hardship in the country,” Domenya said.

Asante Kotoko lead the table with 40 points after 18 matches.