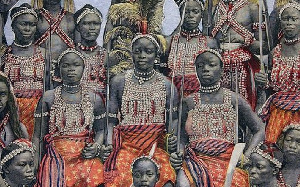 The untold story of Queen Hangbe, who founded the legendary Dahomey Amazon Warriors

The Dahomey Kingdom was a powerful regional state that controlled large areas and several tribes in pre-colonial West Africa around the 18th and 19th centuries like the Oyo Empire, the Songhai Empire, the Mali Empire, and so on. At the height of her powers, Dahomey (present-day Benin) had a large army including the powerful Dahomey Amazons – an all-female military unit that terrorized the enemy.

The Dahomey Warriors/Dahomey Amazons were traditionally called the N’Nonmiton, which means “our mothers” in Fon, the language of the Fon people of Dahomey, now in present-day Benin. European historians and observers called them the Dahomey Amazons as they reminded them of the mystical and powerful all women’s army called Amazons in Greek mythology.

The Dahomey Amazons were not only skillful and competitive but were well-known for their fearlessness when fighting neighboring tribes or resisting the forces of the Europeans. In fact, the Kingdom of Dahomey being famous and powerful is partly due to the Dahomey Warriors.

Not much is known about how the Dahomey Warriors came to be. However, legend states that they were descendants of Queen Tassi Hangbe, who ruled the Dahomey Kingdom in the early 18th Century after the sudden death of her twin brother.

According to historian Bienvenu Akoha, the first Amazon was Hangbe. Her father was King Houegbadja, founder of the Dahomey Kingdom, and her twin brother was King Akaba. In 1708 after the death of her brother Akaba following a long illness, Hangbe was “silently installed” as the head of the military. And after coming back from her military campaigns, she was publicly proclaimed Queen of Dahomey.

But she reigned for only three years as she was forcibly removed from the throne by her other brother Agaja. Hangbe was all for women during her short but powerful reign. She urged women to engage in farming and go hunting, two activities that were at the time solely for men.

And being a fearless warrior who led men and women in battle, she gradually formed an all-women battalion that became known as the Dahomey Amazons. The Amazon warriors were recruited and trained from their earliest childhood, and thanks to their fierce training, they became “more efficient warriors” than men. During wars, they were ruthless and could behead their enemies.

These gallant female warriors served as royal bodyguards to Hangbe and the kings who came after. King Gezo, who ruled over Dahomey from 1818 to 1858, officially integrated the Amazons into the army. During his reign, the legendary Seh Dong Hong Beh was the head of the Amazons. The Amazons would bring King Gezo prisoners and he would deliver those prisoners to a slave merchant from Brazil in exchange for guns, gunpowder, tobacco, and alcohol. This enabled the Dahomey Kingdom to strengthen its power, according to an article by DW’s African Roots.

All in all, the Dahomey Warriors were respected protectors of their kingdom and strategic leaders. Their drills and military parades were always performed to dancing, music, and songs, and their weapons were sometimes used as choreographic props. As expressed in their songs, their goal was to outshine men in every respect, and European travelers observed that they were better organized, swifter and much braver than male soldiers. As such, the King would send them to war as opposed to their male counterparts and European soldiers would also hesitate to kill them as they were often young women.

The women also enjoyed privileged relations with the King, swearing to celibacy and living in the royal palace, which only the King and his entourage had access to. As a testament to their power, women servants rang little bells to warn the people of the women soldiers’ presence and inhabitants were required to move aside, bow and avert their eyes.

The Dahomey women’s army only became defunct when the Dahomey Kingdom fell at the end of the 19th century. According to UNESCO, after two months of fighting and previously broken accords between the French and Dahomey, the king of Dahomey at the time, Behanzin, took flight and set fire to most of the royal palaces, marking an end of the Kingdom of Dahomey and its army of women in 1892.

The Dahomey king was later arrested, deported to Martinique, then Algeria where he died. Dahomey then became a French possession between German Togo and British Nigeria, until Benin declared independence in 1960.

The Dahomey Amazons are today seen as a symbol of female emancipation but they were largely forgotten until recently when the movie, Black Panther, highlighted their amazing prowess in war. The descendants of the Amazons also still keep their traditions alive in present-day Benin. Reports say the role of the current Queen Hangbe and her Amazons is largely ceremonial, presiding over religious rituals that take place at the temple near her home in Abomey, the former capital of Dahomey Kingdom, and now a city in southern Benin.

Previous Nigeria lifts ban on Twitter after seven months – Official
Next Check: You may have unknowingly subscribed to these mobile services