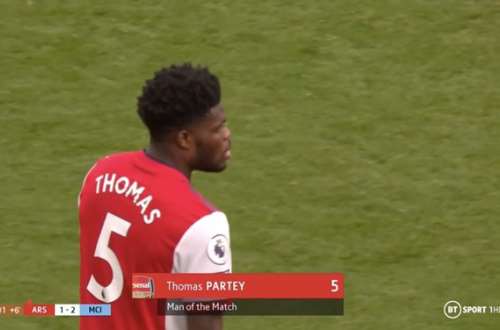 Ghana midfielder, Thomas Partey has been awarded Man of The Match in Arsenal defeat to Manchester City.

The Gunners hosted Pep Guardiola’s side at the Emirates Stadium on Saturday in the first game of the Premier League in 2022.

Bukayo Saka broke the deadlock in the first half of the game.

In the second half, Granit Xhaka gave away a soft penalty on Bernardo Silva, duly converted by Riyad Mahrez. A minute later, Martinelli blasted wide, seconds before defender Gabriel saw red for a foul on Jesus.

With the game seemingly drifting to a draw, Rodri popped up at the death to poke home a winner after Arsenal failed to clear a Kevin De Bruyne pass.

Despite the defeat, Partey was named the best player on the pitch.

The 27-year-old who played in the middle with Xhaka was brilliant and impressive despite the painful loss.

Arsenal meanwhile ended the game with 10 men after Gabriel was sent off.

Partey now joins the camp of Ghana in Doha for the 2021 Africa Cup of Nations [Afcon] in Cameroon, which kicks off from January 9 to February 6.