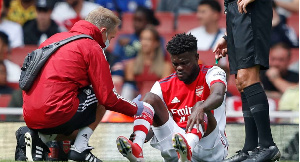 Black Stars midfielder, Thomas Partey, is set to miss the remainder of the season at Arsenal due to injury.

The Ghanaian picked up a thigh injury knock in Arsenal’s 3-0defeat to Crystal Palace on April 4.

Partey was hoping to return to action for the Gunners but initial scans showed that he sustained a significant injury which has ruled him out of the season.

Speaking ahead of Arsenal’s match at Southampton on Saturday, Arteta confirmed that their star midfielder would not play again until next season.

“The news that we got after having another assessment was not great. It is not looking very positive [for] his availability this season, but we will have to wait and see,” Arteta said.

“He is trying to get back as quickly as possible, but at the moment we are not very optimistic about it,” he added.

Partey played an instrumental role in Arsenal’s quest to reach the top four of the Premier League.

The Black Stars player was voted Player of the Month by Arsenal for February after helping the club to a good run in the league.

The player’s injury could be a big worry for Ghana’s campaign for the 2022 World Cup in Qatar slated for November-December.

Tags FOR OUT PARTEY RULED season THE THOMAS