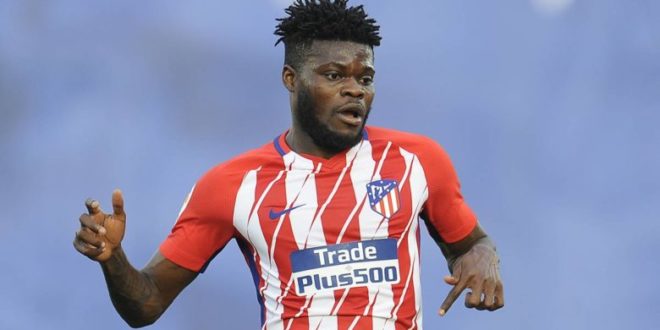 Ghana midfielder Thomas Partey has shown his support for Ghanaian dancehall musician Stonebwoy by promoting his new album with the title “Anloga Junction”.

Partey who grew up at Ashaiman, where Stonebwoy lives, took to his Twitter handle and shared the new album of the latter to show his love and support.

Stonebwoy disclosed in an interview with JoyNews Prime that the name “Anloga Junction” is different and would make people wonder what this album has to offer.

“The name on its own is interesting just for the fact that we have come this far, having gotten a lot of experience from the works that we have done, learning from the best and pushing our best to do the most and the best and as well creative-wise.”

“So we decided to give this album an identity that will actually stand out, one that is different from everything else. So when you hear ‘Anloga Junction’, you’ll begin to wonder wow, it could have been called something else.”

Stonebwoy added that the name, Anloga junction for his new album, has also had an effect on the use of his local language, Ewe, in his songs.

According to him, unlike before the use of Ewe has doubled which makes him proud adding that “I have always been but will continue to sell Africa to the world from where ever we stand or come from.”

Meanwhile, Thomas Partey has also been dominating the headlines for some time now in the football transfer news. He has been linked to Arsenal, who have reportedly tabled down 50 million euros to Atletico Madrid to meet his buyout clause.

But Atletico Madrid are also bent on keeping the 26-year-old at the Madrid capital and have also offered him an improved wage of 130,000 a week, which would see him double his earning at the club.