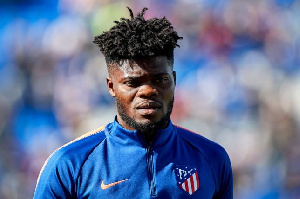 Black Stars player Thomas Partey is unhappy with the contract offer put on the table by Atletico Madrid and the defensive midfielder has held talks with Arsenal about a summer move.

But Arsenal fans were offered excitement last week when Partey’s father Jacob claimed negotiations over a switch to north London at the end of the season have been taken place.

“It all depends on the offer Atletico are demanding,” he added. “If he goes to Arsenal fine, they have a lot of supporters in Ghana.

“I will be happy if he decides to move to Arsenal. What they are discussing now is how Atletico will release him.”

He insists that the conversations have taken place, but that the player’s representatives were trying to cool down talk of a move because they did not want such information out in the public.

Ghanaian Journalists Rahman Osman told The AFC Bell: “I do not know the smallest details in the contract submitted by Atletico Madrid.

“But the description that I received from my sources stated that it did not meet the aspirations of the player and his team.

“This offer is ‘rubbish’ and therefore the player did not sign it.

“I contacted Thomas’ father and the quotes are real.

“He said that on the radio but was not authorized to publish those details.”

Partey is currently under contract until 2023 but Atletico want to extend his stay at the Wanda Metropolitano by two years, upping his release clause to around £100m in the process.

And the Guardian say Diego Simeone has urged the La Liga outfit’s hierarchy to do what it takes to keep him.

The dynamic African is vital to the Argentine coach’s style and displayed his talents in the Champions League defeat of Liverpool before coronavirus shut football down across Europe.

Arteta sees the energetic midfielder, who is defensive-minded but also excellent at driving forward in possession, as the ideal man to build around in a box-to-box role.

Were Arsenal to complete a move for Partey against the odds, with their financial situation making for grim reading due to the repercussions of the coronavirus crisis and a lack of Champions League football in recent seasons, it is not known what that would mean for current midfield anchor Granit Xhaka.

The Gunners do not reinforcements in the middle, however, with Lucas Torreira having been linked with a return to Italy and the on-loan Dani Ceballos expected to head back to Real Madrid rather than remain at the Emirates on a permanent basis.