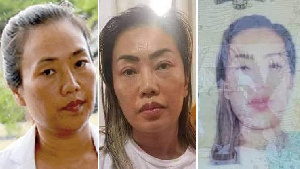 The most talked about personality in Ghana since last week has been a Chinese woman notoriously referred to as queen in the illegal small-scale mining, alias galamsey, business.

When her re-arrest was announced on September 5, 2022, legal, political and security concerns were raised from different quarters for different reasons.

The name Aisha Huang which she was known by back in 2017, when she was first arrested and in 2018, when she was ‘removed’ from Ghana after the state dropped charges against her, was what was used in most reports.

Then came a revelation that despite having come in through official means, per the official account, she had managed to secure a Ghana Card upon her illegal return to the country.

In came the National Identification Authority, NIA, the institution tasked with providing the Ghana Card and the non-citizen card, which Aisha is said to have applied for.

In the NIA’s explanation, it emerged that the real name of Ms. Huang, at least per their records, was “En.”

An NIA statement explained: “On 26th February 2014, a Chinese woman named HUANG EN registered as a first-time applicant for a foreigner identity card at the Foreigner Identification Management System (FIMS) registration centre at Nhyiaeso, Kumasi, in the Ashanti Region.

“Her biometrics were captured and she was issued with a Non-citizen Ghana Card. She subsequently did two more renewals on 31st August 2016 and 8th January 2018, using the same details and Chinese passport number G39575625,” NIA’s statement explained.

The statement continued that another Chinese national tried to register a new non-resident Ghana card in August 2022, by which time Aisha Huang was supposed to be away from Ghana having been removed in 2018.

This applicant tried registering with the name Ruixia Huang, but the NIA system flagged it because the biometric details matched that of Huang En.

“On 25th August 2022 at 10:35 am, an incident occurred at the FIMS Registration Centre in Tamale, Northern Region, involving a Chinese national who visited the centre as a first-time applicant with the following details:

“The registration, however, went into a technical state known as ‘RejectedDueAFIS’, which meant that the biometrics of RUIXIA HUANG possibly matched that of an already existing person in the NIS database. The registration officer, therefore, sent a request to the technical support team for further investigations.”

When some Members of Parliament contested whether Aisha Huang was deported at all in 2018, documents to that effect were published, including Immigration Revocation of Permit and Repatriation’ letter as well as Ethiopian Airline flight ticket and boarding pass – all bore the name Huang En.

The name Ruixia, first introduced by the NIA in its release has popped up as of September 14, 2022, when Aisha and three co-accused persons returned to the Accra Circuit Court where they are facing two charges.

The fact sheet of the case read in part: “During the year 2017, the 1st accused was arrested for similar offence but managed to sneak out of the country averting prosecution.

“During the early part of 2022, the 1st accused sneaked back into the country after having changed the details on her Chinese passport,” the sheet read in part.

It is clear that Aisha remains an alias for the galamsey queen, even though it resonates better with discussions around her, En was deported or repatriated and Ruixia returned despite being En.

The case involving Ms. Huang has been adjourned to September 27 after hearing of September 14, 2022.