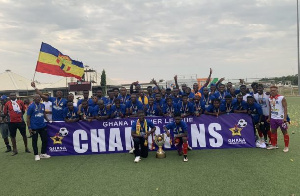 Protocol Officer for Kumasi Asante Kotoko supporters, Kojo Asante has disclosed that one of the Hearts of Oak supporters, Paa Kofi Sumsum died after he ‘had touched the trophy the team won last season.

Speaking on Total Sports Review on Rainbow Radio 87.5Fm, he said the supporter collapsed after he had touched the cup in jubilation of his team winning the season.

He told host Isaac Wallace Worlanyo that the death of the supporter was painful and although he would not directly blame the incident for his death, he believes it could have been a factor or otherwise.

Sumsum died few months ago as he was unable to recover from a brief illness.

This came less than 24 hours after Hearts of Oak booked their place in the MTN FA Cup final with an impressive 3-0 victory over Medeama.

Sumsum’s last post on social media was on July 10.

He posted a picture of himself celebrating Hearts of Oak’s success in the Ghana Premier League.

The Phobians ended their 12-year wait for the league crown on July 11 when they drew 1-1 with Liberty Professionals in Accra.

Reacting to this, Kojo Asante said the team did not win the cup fairly and as a Kotoko supporter, he had always prayed that the Hearts of Oak will pay for that.

He said he had always prayed that Hearts of Oak would be defeated during their African games because they did not win the trophy on merit.

“May Sumsum rest in peace. He fell ill after touching the trophy Hearts of Oak won. He died three days after he had touched the cup. Those who love football were pained by his death. As supporters, we have questions to answer over his death because as supporters, we have lost something. I am not saying that caused his death but what happened was painful,” he added.