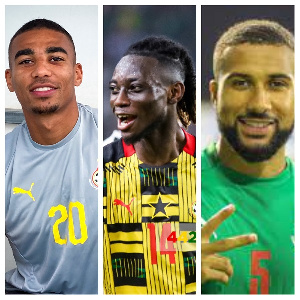 The busy and long football season is over but football fans still have a lot to look out for as the transfer window begins.

The transfer period is a key feature of the sport and with the emergence of transfer gurus and transfer IKS (In The Knows), the window has become an engrossing part of the game.

Fans follow all kinds of persons and rumors to have minute by minute update on players reportedly being chased by the clubs.

There have been some big Ghanaian moves in the past with the movement of Thomas Partey to Arsenal from Atletico Madrid topping the charts.

After an incredible season with Strasbourg, Alexandre Djiku is set for a big money move to the Spanish La Liga.

Djiku has been heavily linked with Villareal and Sevilla but the reports indicate that he has reached a three-year agreement with Sevilla and waiting on his club to find a common ground.

Reports indicate the transfer and his wedding are the reasons he was excused from the Ghana squad for the 2023 AFCON qualifiers.

Kofi Kyereh is another Ghanaian player who had a successful 2021/2022 season. The St Pauli midfielder was instrumental in his team’s quest for a promotion to the Bundesliga but they were not successful.

Kofi Kyereh has left the Ghana camp for the 4-nation tournament to sort out his future and it is believed that a big move to the Bundesliga is on the cards.

FC Bordeaux might have been relegated but Gideon Mensah is one player could hold his head high for his performance in the season.

The RB Salzburg left back who was on loan at the French side featured consistently for his side in their unsuccessful battle against relegation.

With the loan move over, Gideon Mensah is due to return to Salzburg but he has left the Black Stars camp in Japan to negotiate a new deal.

It is being reported that a new club has come and Mensah could be on the verge of landing a new deal.

After a successful season with Nantes, clubs are drooling over the Ghanaian winger with firm interest to get him on their books.

Bukari has returned to his parent club FC Genk but clubs want him and Genk could be forced to sell him.

Baba Rahman has returned to Chelsea after yet another loan season at Reading in the Championship.

The left back has no future at Chelsea is expected to move to the Turkish league where Fenerbahce, Galatasaray and a host of Turkish clubs are said to be interested.

Baba Rahman made 29 appearances for Reading and managed one assist.