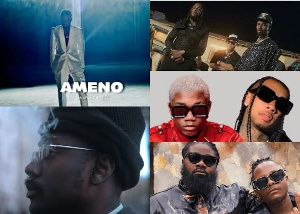 This week has been blazing hot with colourful visuals for new music entries and old Ghanaian songs that have been revived with their official music videos.

Music lovers have been rating the quality of videos and the efforts put into their making.

KiDi has been trending number two on Youtube following the release of the official video for the ‘Touch It’ remix which featured American artiste, Tyga.

Captain Planet of 4×4 fame has a new single titled ‘Say You Love Me’ which has Kelvyn Boy on it.

This week, the much-anticipated music video for the ‘Second Sermon’ remix by Black Sherif which featured Grammy award-winning Nigeria singer, Burna Boy was released after a private viewing was held in Accra.

As we prepare to relax and destress this week, GhanaWeb has put together all the latest Ghanaian music videos for your viewing.

Enjoy the videos below: