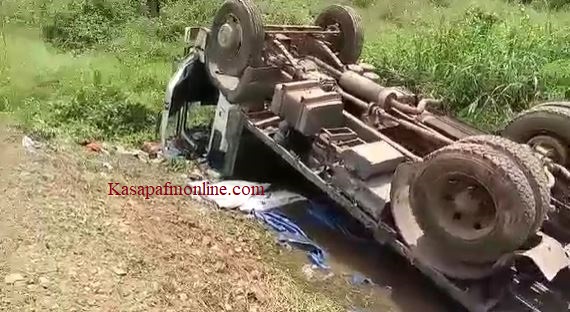 A truck distributing flour to Senior High Schools in Eastern Region has been involved in an accident at St. Stephen’s Senior High Technical School (STEPSS) at Akyem Asiakwa in Abuakwa South Municipality in the Eastern Region.

This was after a wooden bridge connecting the school collapsed.

The accident occurred Tuesday, March 1, 2022 when the truck returning from the school toppled over and landed on the side of the road.

The driver and other occupants of the vehicle however escaped unhurt.

According to the Headmaster of the School Mr. Samuel Anarfi Asante, the condition of the deplorable bridge continued to deteriorate, however, several letters to the municipal assembly and other state institutions responsible for the construction of culverts but have proved futile.