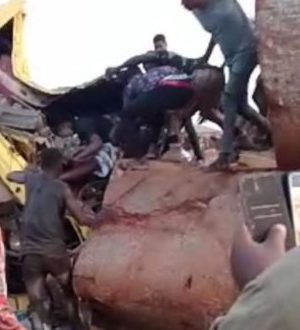 Driver of an unidentified truck carrying timber logs has been crushed to death in an accident.

According to reports, the timber truck driver lost control while negotiating a curve, leading the truck to somersault.

According to one Boampong who is an eyewitness, the driver’s mate upon seeing the looming danger jumped off the truck before the accident occurred.

It is said he advised the driver to do same, but he insisted on driving the brake-failed car to safety.

When it got to critical condition, he tried to open and jump off but he was trapped and crushed to death instantly by one of the longest logs.

It took minutes of efforts by some residents to pull him out of the wreckage.

The body of the deceased has been deposited at the Goaso Municipal Hospital pending further investigations.

“Although the incident is sad, we are lucky to have minimal casualties. The fatality rate could have been worse if it happened on a Thursday, which is a market day,” the eyewitness said. 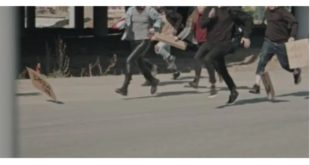