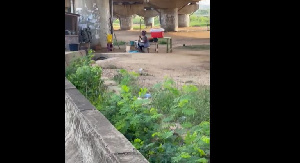 Two women have been arrested by the Police for operating a fufu ‘chop bar’ under the Malam overpass in Accra.

The Police action happened after EIB broadcaster Francis Abban posted a video of the chop bar on Facebook Saturday morning.

The two, Ruth Owusu, 32, and Mary Entia 35 are currently in the custody of the Accra Police while their Cooking Utensils, mortar, and pestles have been retrieved.

In August this year, two persons were arrested by Police for running a fufu joint on the pavement at the Pokuase Interchange.