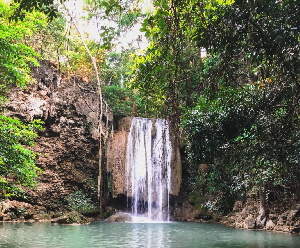 The deceased persons have been identified as Kwaku Owusu, about 26 years, and Kofi Kyei Mensah, 28.

According to an eyewitness, Evans Hayford Narh who was a friend to the deceased persons, they went swimming in the waterfalls on Friday, November 5, 2021 but did not return.

Their clothes were later found at the shores of the waterfalls.

A search, including the pouring of libation by a priest in the community, proved futile.

On Saturday morning, divers were sent to the scene to retrieve their bodies.

The bodies have been deposited at the Begoro Government hospital morgue pending autopsy by police.

This is not the first time a drowning incident has been recorded in the Osubin waterfalls.

In 2019 for instance, a 17-year-old boy drowned in the same waterfalls.

Prior to that, many other cases had been recorded .