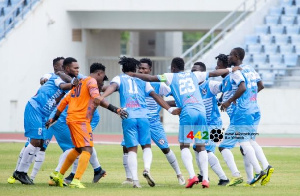 Two Ghana Premier League players and a referee have been busted for their involvement in betting scandals by the FIFA/CAF integrity team.

One match official whose name has been given as Isaac Osei is said to have had a betting history of the Ghana Premier League on his phone.

It also adds that betting slips of matches in  the Ghana Premier League were also found on his phone by the team.

The Ghana Football Association(GFA) has since suspended the referee indefinitely as investigations still goes on to unravel more about the scandal.

According to information reaching us from within the FA, a team from FIFA/CAF’s integrity team have been dispatched in the country helping to arrest the culture of betting and match fixing in our league.

The two players who are all from Berekum Chelsea were also found to have betting slips of Ghana Premier League on their phones.

They have both since been suspended by the club as investigations are still underway.

Ghanaguardian.com understands that the FIFA/CAF integrity team raided the camp of Berekum Chelsea before their match day 28 clash against Great Olympics.

The Ghana Premier League has been fraught with allegations of match fixing and match manipulation in times past and also presently.

The GFA seemingly has adopted  a lackluster approach to resolving the issue as last season game involving Ashgold and Inter Allies which was marred  with match fixing allegations has still not been resolved by the GFA.

Clubs in the league have been in dire financial straits with most of them playing the league in total penury and misery.

But with recent events of rampant allegations of match fixing and match manipulation, the GFA has invited the FIFA/CAF team to help weed out the betting scandals in our league.