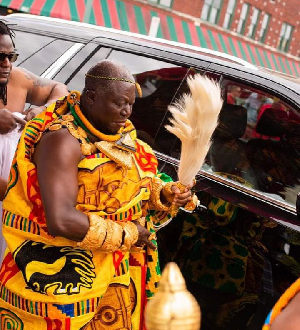 The unique symbolism in the kente the Asantehene wore to Memphis

The Asantehene’s kente weaver is called “Kentehene,” which translates in English as the chief kente weaver, and it is for no mere reason that tag is given to the person.

As the guest of honour at this year’s Memphis in May International Festival held in Memphis in the United States of America, the sovereign ruler of the Ashanti Kingdom, His Royal Majesty Otumfuo Nana Osei Tutu II, showed up in glory and seized the opportunity to market the rich Ashanti culture and tradition.

This year’s event was dedicated to Ghana and the festival’s highlight was Saturday, May 7, 2022, when the Ashanti culture took over the streets of Memphis, Tennessee.

With a long procession led by Ashanti chiefs, queens and subjects, the Otumfuo riding in a Chevrolet SUV brought Memphis to a standstill with a parade that commenced at 126 Beale Street.

But one of the things that caught the eye of many was the unique kente the Asantehene wore.

In a tweet by The Asante Nation (Ashanti_Kingdom) on Twitter, it provided details into the symbols that made up the cloth the King wore: Sikadwa Kofi (the Golden Stool), and the Asante kɔtɔtɔ (the Porcupine warrior).

Here are the breakdowns of these symbolisms:

“1. GOLDEN STOOL: The Sikadwa represents the Spirit and Soul of we the Asantes. It is our divine authority and the sovereignty of the Asante Kingdom. This shows that Asante is an independent kingdom and does not kowtow to anyone. Among the three trinities of the Asantes…

“SIKADWA is the first and the head. Just like Christians have three trinities, (God the Father, the Son, and Holy Spirit). In war, we defend the Sikadwa first. Even in the cloth Otumfuo is wrapping, the Sikadwa can be seen on top. Sikadwa ne panin, Sikadwa ne Asanteman ti,” it said.

For the second symbol, the porcupine warrior, the tweet explained that it depicts the national emblem of the Asante nation.

“Remarkably threatening-looking red “Porcupine”, displaying an inbuilt arsenal of sharp spikes for use when attacked by an enemy. The porcupine warrior is the philosophy and represents the Asante people. We fight with our last breath. We are very brave people, not only on the war front but we perform outstandingly anywhere we find ourselves and in any field, we work. Yes, “Kum apem a, apem beba” (Kill a thousand, a thousand will come). Among the three trinities of Asanteman, we the Asantes are the last.

The colourful procession of the Asantehene in Memphis, dominated by the kente cloth, was accompanied by drumming, singing and the chanting of appellations to the occupant of the Golden Stool of Ashanti.

The convoy ended at Hardy Park in Memphis, where the Otumfuo again sat in State to receive homage from his chiefs and subjects as well as other dignitaries who thronged the event.

The event was also characterized by traditional Ashanti drumming and dancing, as well as the recital of Ashanti oral history dating as far back as some 500 years ago.

Tags ASANTEHENE IN kente Memphis SYMBOLISM THE to unique WORE