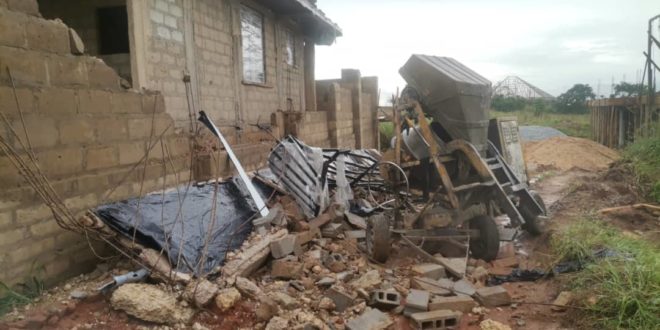 Two persons have died following the collapse of a two story building at Oti new site near Sokoban Wood village in the Ashanti Region.

The two according to report were working on the site when parts of the structure collapsed on them on  Friday September 16, 2022.

The deceased were only identified as Akwasi, 37, and Kwaku, 28,all masons working on the structure.

Some residents in the area who rushed to the rescue of the victims described the incident as gory.

One of the workers who witnessed the sad incident in an interview with OTEC News Kwame Agyenim Boateng on Monday September 19, 2022 explained the incident, ” My job was to weed around the building, however my house is just around the area so i went home after completing the tasked.

” I was home around 4:30pm on the said day when i heard people screaming, i rushed out only to see part of the structure down, unfortunately the  persons were trapped by the debris.”