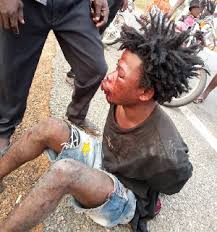 Harrison Kojo Agbovi from Akatsi Agbaflome, and Raphael Hlotse, both 23 years, are currently in the custody of the Akatsi Police for engaging in motor snatching robbery.

Mr. Baah said the two suspects together with one other, who is currently at large, attacked and robbed a commercial motor rider of his Sanya motorbike with registration number M22VR121 at Kpevi.

He said on the day of the attack, one of the suspects hired the services of Edro Tobias, a commercial motor rider from Datsiedu near Ziope.

He said upon reaching the planned location, the pillion rider attempted to strangle the rider with a rope.

He said the rider was overpowered with support from other accomplices who emerged from the bush and they sped off with the Sanya motorbike belonging to the victim.

“Luck eluded the suspects as the rider shouted for help and members of the community including other commercial motor riders arrested the two suspects in the neighbouring village, called Kpevi,” he added.

Mr. Baah said the mob, drawn from the adjoining villages, subjected the two suspects to severe beatings before the Police got to the scene, where the suspects were rescued and sent to a health facility at Akatsi for medical attention under Police watch.

He added that the third suspect, name unknown, however, managed to escape arrest and fled into the bush.

The stolen motorbike was also retrieved.

Meanwhile, the two suspects would be arraigned before a Sogakope Circuit Court on Thursday.

The Ghana News Agency at Akatsi, also learnt that issues of motorbike snatching were becoming rampant.

This incident comes barely four days after a pillion rider was arrested for attempting to rob his rider of his motorbike at Akatsi Agorve.