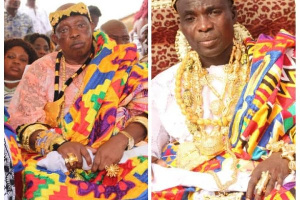 After more than 30 years of being vacant, the Aglebe stool from the Kpornuga Division of Anlo Afiadenyigba has settled on Joseph Ashu Evadzi, a Nigeria-based ship captain with the stool name, Torgbui Aglebe II.

In a related event, kingmakers of the Akamu stool of the Agbonuga Division have also settled on a 38-year-old Azi Ganyo, popularly known as Sadaco, a popular businessman and the Chief Executive Officer (CEO) of SBBV Lotto Company.

With the stool name, Togbui Akamu V, he succeeded the late Torgbui Akamu IV, which rendered the stool vacant for 18 years after his demise.

Both chiefs were outdoored after days of going through all the necessary traditional rituals and processes.

It was all joy and ecstasy when the two newly crowned chiefs were outdoored on Saturday, December 18 at the popular durbar ground within the Anlo Afiadenyigba community.

The outdooring ceremony was witnessed by Chiefs from the Anlo State and beyond.

In a solidarity message, Mr Dzudzorli Gakpey, a personal friend of Torgbui Akamu V, congratulated the new chiefs and wished them well.

He appealed to them to work in harmony with other chiefs and stakeholders in bringing rapid development to the area.

Torgbui Kadzahlo IV, the Dufia of Anlo Afiadenyigba and Chairman of the ceremony, advised the youths to eschew all negative behaviours.

On their part, the new chiefs also pledged to work with all chiefs in the area and beyond towards fostering unity among the people of the area.

They pledged to promote education, health, and sanitation in the communities.

Mr Bubu Klinogo, chairman of the Anlo Afiadenyigba Youth Council, underscored the important roles chiefs play in the socio-economic development of every community.

It was graced by Members of Parliament (MPs) from Volta, including Mr Kwame Dzudzorli Gakpey, MP for Keta, and his counterparts from Central Tongu and Anlo constituencies.

Other dignitaries include Mr Henry Ametefe, Volta Regional Chairman of the National Democratic Congress (NDC), and other regional and constituency executives of the party.

There were cultural performances from drumming groups from the town and others from Benin and Nigeria.

Source: GNA
Related Topics:AnloCHIEFSoutdoors
Up Next