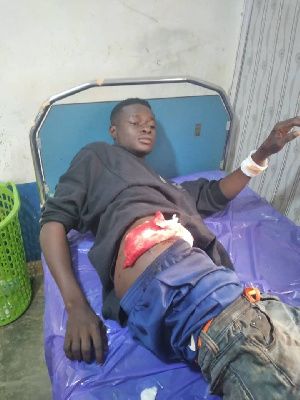 Two people from Dumase, a community near Bogoso in the Prestea Huni Valley Municipality were shot during a protest on the premises of Future Global Resource, formerly Golden Star Resources.

Due to this, the community was banned from making any developmental project. After about 15 years of making the promise, the community has not been resettled.

This made the youth resort to a demonstration this morning after several talks with stakeholders.

The youth set the company’s digital security post, union office and some other places in the company ablaze, while lots of cars belonging the company had their windscreens destroyed by the protester.

As if that was not enough, the youth marched to the administration block, destroyed air conditioners ransacked some of the offices and destroyed other things.

According to him, the community had engaged the company on issues bothering the community but to no avail. He added that the company finally agreed to meet the community on Monday 10am in order to respond to the issues raised but they did not turn up, leading to the demonstration this morning, where two people were shot by the police.

The victims are currently receiving treatment at the Prestea Government Hospital.

Meanwhile, the company has released a statement responding to some of the issues raised by the community.

The statement signed by the General Manager of the company Salid-Muhammed Ahmed said ‘it is our strong view that we need a collaborative approach to address these and other grievances in the short, medium and long term, and in an environment of trust and mutual respect. Such an environment can only be developed through long-term commitment to constructive engagement. We would, therefore, like to propose the setting up of a working committee comprising yourself and other Dumasi community representatives, the Municipal Chief Executive of PHVDA, and other relevant stakeholders, to gain a common understanding and agree on a sustainable way forward’.