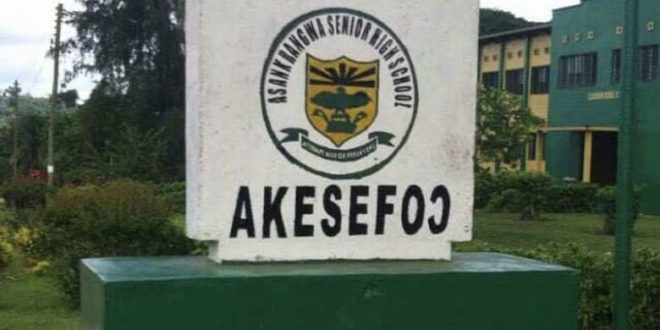 Augustine Swanzy Oduro, a history tutor and Ernest Donkor, a physics tutor at Asankrangwa Senior High School (ASANCO) in the Western region have been remanded for allegedly raping two first year students of the school, aged 16 and 15, respectively.

The incident occurred on Thursday, July 14 during the Wasa Amenfi West Municipal inter-schools football competition, during which the 15-year-old girl was celebrating her birthday.

According to Ahobrase3 ye TV/radio reports, the two teachers took the birthday girl and her 16-year-old friend to a nearby town called Wasa Dunkwa, also in the Western Region, under the guise of organizing a birthday party for her.

They took them to a hideout, which according to the reports, the students did not know of their intentions.

Mr. Ernest Donkor, who teaches physics, offered the 16-year-old lady a malt. Few minutes after the bottle was opened, the lady stepped out to ease herself and returned to finish the remaining drink.

She fell asleep and only woke up to find herself naked and bleeding from her private parts.

However, the 15-year-old lady who happens to be the birthday girl luckily escaped the sexual assault at the hands of Mr. Augustine Swanzy Oduro, the history tutor.

The teachers reportedly threatened them not to disclose the incident to anyone. The students who could not hide anymore reported their ordeal to their assistant headmaster, Mr. Daniel Quaison Junior, who also informed the headmaster, Rev. Father Samuel Erzah Bulu.

The headmaster further reported the matter to the police where the two tutors were arrested.

On Monday, July 18, the Asankrangwa Magistrate Court, presided over by His Lordship Augustine Fiifi Danful, remanded the two teachers to allow further investigations to be conducted.

Watch the video as reported by the Asankrangwa-based Ahobrase3ye TV in the local dialect (Twi).