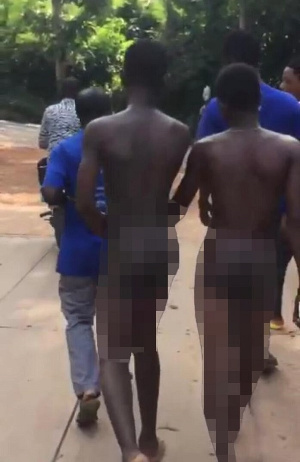 Two teenagers have been stripped naked and paraded on the streets of Akuapem Adawso in the Akuapem North Municipality of the Eastern region over an alleged GHC100 theft.

The victims, both 14 years of age, were alleged to have stolen Ghc100 cash and a mobile phone.

The mob led by one Larbi and Akwei brutalised the two children making one of them defecate on himself in the process.

The minors were then stripped naked and paraded from the Tinkong stretch of the Koforidua-Mamfe highway to the Adawso township where traders were having brisk business on the market day.

A video intercepted by Starr News Eastern Regional Correspondent Kojo Ansah who visited the community to investigate the incident shows the hands of the two minors tied while being paraded and assaulted with their naked bodies.

The mother of one of the victims, Augustina Danso, could not hide her tears recounting the inhumane treatment meted to her son.

She said even though the case has been reported to the Adawso police it has been transferred to the Akropong District Police Command but the suspects are still walking freely. She said those who assaulted her son are rather bragging that a “poor person cannot win a case against a rich man.”

She wants justice to be served.

“Help me, I don’t have anyone to help. The child is my sister’s child. He is deaf and dumb. She can’t speak. We don’t have money to litigate to seek justice. I beg you, help. They paraded them nakedly on the streets. They said they have stolen just Ghc100 which was taken away from them,” Augustina Danso appealed while weeping.

Joseph Amegah who is an eyewitness is disgusted about how the dignity of the Children was stripped by the mob.

“Even if someone steals something of yours, you need not take the laws into your own hands. Definitely, you have to report the person. How they stripped them naked, dragged them through the principal streets through the market, and it was a market day. Drivers, traders, those who are selling, and those who are buying. So they have disgraced the children.”

Efforts to reach Akropong Police to ascertain the extent of the investigation proved futile.

Police chases man for hacking girlfriend with hammer in KEEA