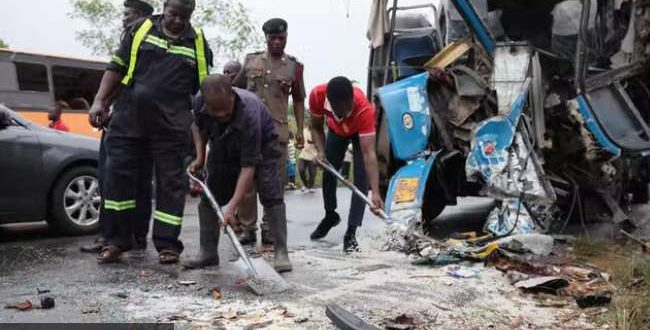 Two young men die after excavator fell on them

Two young men have met their untimely demise at Sefwi Besibema in the Akontombra District of the Western North Region after excavator fell on them.

According to the information available, the accident involved a Long Trailer with registration number GE 4871-X.

The report adds that, the Trailer was transporting an excavator from Sefwi Akontombra to Sefwi Wiawso when it failed brakes and crashed into more than five stores on the roadside in the Sefwi Besibema community on Monday.

Seven people according to the report were trapped, and it took the timely intervention of the community members to rescuing them.

Unfortunately, two out of the seven died instantly after the excavator of the Trailer fell on them.

Their bodies as at the time of filing this report has been conveyed by the police and deposited at Sefwi Wiawso Government Hospital’s morgue for autopsy and preservation.

The injured are also receiving treatment in the same health facility.

The Assembly Member for Besibema electoral area, Hon. Isaac Entsie, disclosed the losses that the incident has incurred on the community by destroying about five petty traders’ stores, their tarred road, and the high tension pole that supplies power from the transformer.

Thank you for reading from here always.

Tags after DIE Excavator FELL MEN on THEM two YOUNG