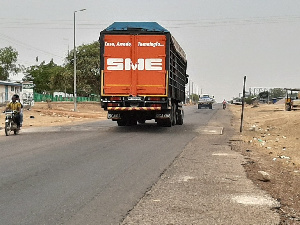 The Police have advised communities to stop the construction of illegal speed ramps as they contribute significantly to road accidents.

“It is erroneous to conclude that simply constructing speed ramps would automatically reduce the speed of vehicles and road accidents. On the contrary, such illegal speed ramps constitute unnecessary traffic obstruction and have contributed to accidents in those communities.

“These illegal speed ramps are poorly constructed without any warning signage to the approaching vehicle, this is dangerous and a criminal act,” Seargent Richard Timinka said on behalf of the Tema Regional MTTD Commander, Chief Superintendent of Police, William Asante on the Ghana News Agency and MTTD road safety campaign platform.

The GNA and MTTD Road Safety Project seeks to educate road users of their responsibilities and sensitize drivers, especially on the tenets of road safety regulations, rules and laws.

Sgt. Timinka expressed concern about the trend of communities constructing speed ramps with the hope that they would automatically reduce speed and accidents.

“If there was any form of accident in a particular jurisdiction, the community members quickly mobilise, construct speed ramps of no standard out of anger to prevent accidents. “So they end up putting sticks, anchor ropes, blocks, stones among others on or in the road to stop speeding and accidents this act is rather dangerous.

“In as much as we have to reduce speed, we also do not need to inconvenient someone using the road or get involved in acts of illegality,” he said.

Sgt. Timinka said any act of obstruction contributed to accidents, “let us desist from the creation of unauthorized speed ramps in our communities.”

He said the law forbade authorised persons or groups, putting any form of objects, implement or any form of materials, which had not been sanctioned by law on the road.

According to him, the Road Traffic Regulation Act 2012 states: “a person commits an offence if without lawful authority or reasonable excuse that person causes anything to be on or over the road.

“Interferes with a motor vehicle, trailer or cycle obstructs direct or indirectly with any traffic equipment in such circumstance it will be obvious to a reasonable person that to do so would be dangerous.”

He entreated the various Assembly members and the committee leaders to talk to the residents about the illegal speed ramps construction.

He advised communities to go through the right channels if they wanted speed ramps to be constructed for them to have approved ones with signage.

Mr Francis Ameyibor, GNA-Tema Regional Manager, called on community leaders to educate the people about the proper means of crossing highways, especially communities living along the highways and motorways.

‘Media General can sack me, I don’t give a damn’ – Captain Smart

We arrested ‘Sticka the driver, not the MP’ – Ghana Police justifies action against Nhyiaeso MP