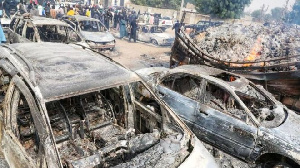 Uneasy calm at Ahanta West as chief is set ablaze in his vehicle, police arrest 8

The police in the Ahanta West Municipality have arrested eight (8) persons for their alleged involvement in the setting ablaze of the Egyambra Chief.

The victim, Nana Blaychie, was set ablaze while in his vehicle, 3news.com has reported.

The incident was reported by Ahanta West Municipal Chief Executive, John Agyare, who stated that the disturbing incident happened in the afternoon of Thursday, June 9, 2022.

“I was in a meeting settling another issue when I heard that there was confusion over the installation of a chief at Egyambra. We quickly dispatched police officers to the community but some community members started throwing stones at the officers. About eight persons have so far been arrested, that is the briefing I have had from the police commander,” he indicated.

He added that he believes the followers of two individuals who are also claiming rights to the chieftaincy stool, are behind the disturbances.

Narrating what exactly happened, however, the victim, Chief Nana Blaychie, who is receiving treatment at a hospital, is reported to have said that there was no chaos surrounding his installation in the community.

He added that shortly afterward, however, when he was with some of his elders, they were stopped by some young men.

“After my successful installation, I was in a vehicle with my elders when some young men stopped us along the way. They poured petrol on my driver and quickly set the vehicle ablaze whilst we were still in it. My driver sustained severe burns but I was fortunate to have escaped on time whilst the vehicle was on fire. I’m currently in the hospital with my driver and other elders receiving treatment,” he explained.

The MCE for the area, John Agyare meanwhile has since assured that he would work to restore peace to the community.

Augustine Dua, a unit committee member, who has since fled the town, explained to the portal that he does not currently know the whereabouts of his wife and children.

“As I speak to you, I don’t know the whereabouts of my wife and children. The community is empty now, we are pleading with the IGP to assist us,” he noted whilst shedding uncontrollable tears.

In the meantime, there are also reports that some residents of the community have absconded due to the disturbances.